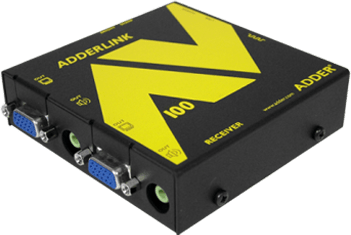 Designed for use in Digital Signage applications, the innovative design allows for flexible distribution that can grow in line with project developments and ensures direct delivery of crystal clear communication to consumers at the point of decision. The ADDERLink AV Series avoids the prohibitive costs of fibre optic cabling, displays with built in CPUs or locating a CPU next to each screen.

Extends video and audio across a single CATx cable.

Feed through / cascade port at transmitter.

Use stand alone or rack mount 16 modules across 3U.